Android vs iOS: Which One You Should Learn for Your Future Career? 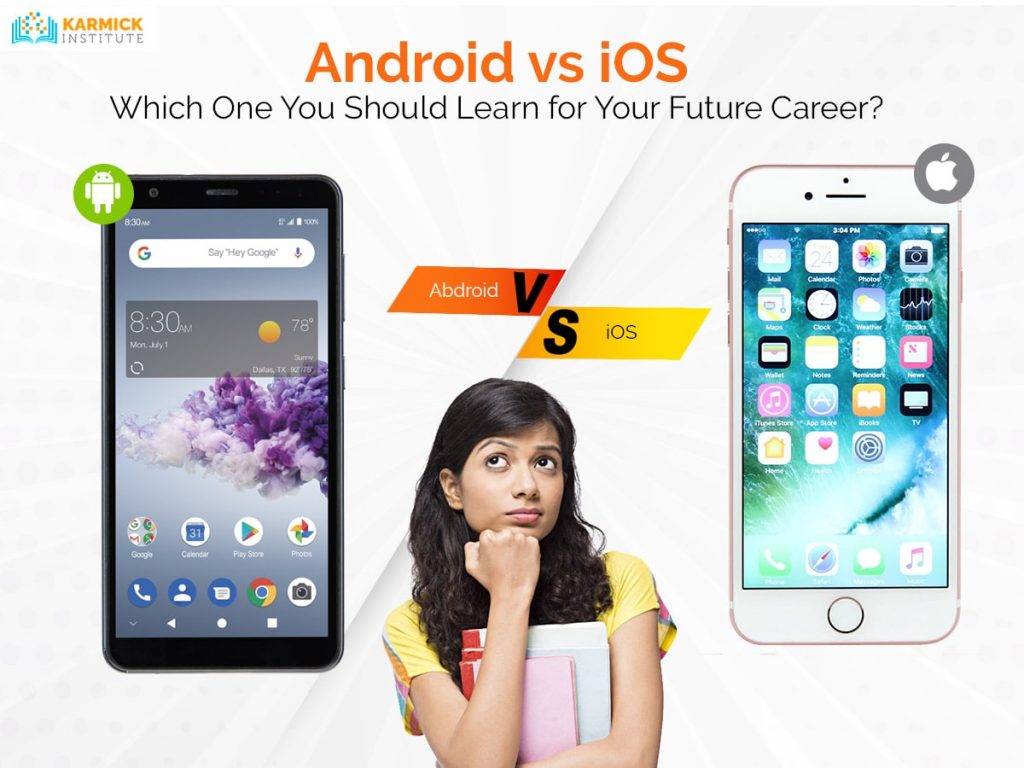 In the software industry, mobile development is at present one of the fastest-growing domains. It is full of opportunities, and one can also earn money as a freelance app developer. There are millions of people in India who work as mobile app developers and earn decent money. So, are you also an aspiring mobile app developer? Are you confused about which one you should learn for your future career? If yes, here are the few factors that you must keep in mind to make an informed decision.

Android, iOS, and Windows are the operating systems that rule the market. As per Statista, Android enjoys a share of over 95% followed by Apple’s iOS, which has just a 3.2 % market share in India. So, no doubt enrolling yourself in an android app development course makes more sense if you are targeting only the Indian audience. Here, you have to keep in mind that if you want to target people in the United States, it is best to learn iOS app development as in the U.S as iPhones are much more common than Android devices.

If you are a newbie with no prior experience in mobile app development, it will take some time to get familiar with new technologies. However, both have a different set of complexities, and hence, the learning time may differ. For iOS app development, you need to learn swift as it is the most popular programming language after Objective C for developing ios apps. Now, the learning curve for Swift is not steep, which means you can learn it quickly. If Android app development is considered, several programming languages are used in the industry, such as Java, C#, Python, Kotlin, and C++. So, you can learn any of these languages as per your learning capability.

For developing ios apps, you must have a Mac computer that runs the latest version of Xcode. Now, Xcode is Apple’s integrated development environment (IDE). It is a pre-requisite for developing any software for ios devices. On the other hand, you need to have a computer running on any operating system for developing android apps. So, mobile app development for android devices is the best course of action.

If you are getting into the app development business to make monetize them and earn decent revenue, you have to be quite careful about choosing the right platform. It has been found that ios users are more likely to make a payment for an app in comparison to Android app users. So, if you can sacrifice the revenue, go for android app development or else choose the one that guarantees more money.

The platform that has more clear document is usually the one in which app development become easier for beginners. While many ardent admirers of the Android platform may disagree but the ios community and documentation are more helpful. As a developer, you may quickly found ways to solve a problem if you come across any during developing your app.

Publishing an android app on Google Play is fairly an easy affair. You have to just pay a one-time fee of $20, and then Google will scoop up a whopping 35% of the revenue (if any). You will have the right to distribute it wherever you want, but things are not that simple if you are want to publish your ios app development. First, you have to publish it only through the Apple App Store. Next, you have to pay a fee of $99 a year, and here like Google, Apple will scoop up 30% of the revenue ( if any). If these are not enough, you will be not eligible to distribute it freely as per your wish as Apple has a more restrictive policy regarding app distribution.