Top 5 Programming Languages That Will Guarantee A Decent Job 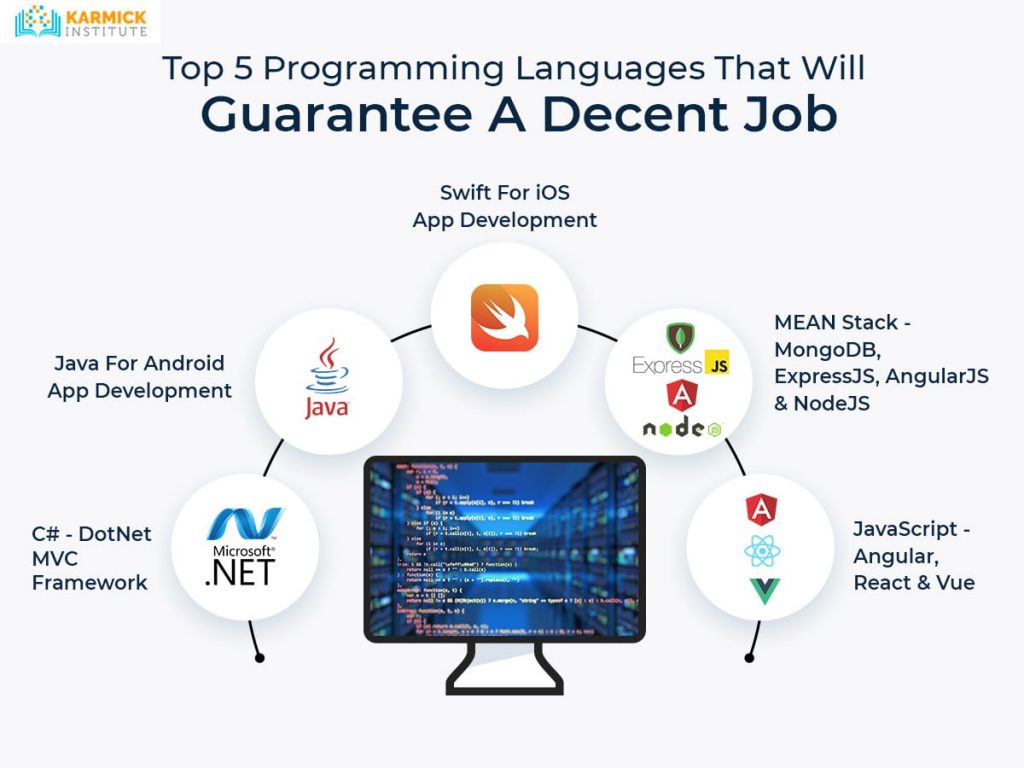 Entering into the world of coding is a great thing. But if you are a beginner, there lies a tough choice ahead which you must make. As you know, there are hundreds of programming languages out there. The question arises which language to learn, so that getting placed at a top MNC would not be a problem. To make things easier for you, we have compiled the top 5 most sought after programming languages that will guarantee you a decent job.

But first, what exactly is a programming language?

Just like people in different parts of the world converse in different languages, computers also use a wide variety of languages to perform certain tasks. By using these programming languages, software developers can direct how a certain application, script or query will perform. But in order to do this, you need to learn the technical specifications of the language in depth.

Most of us have to work on the web for the better part of each day. When it comes to naming the go to language for web development, JavaScript is the king. It is JavaScript in combination with HTML and CSS that makes websites and web pages appear so pleasing to us. Through the years, JavaScript has given rise to immensely popular front-end frameworks such as Angular, React and Vue.

MEAN is an acronym for MongoDB, ExpressJS, AngularJS and Node.js. Since all these open source technologies are based on the common language JavaScript, there is no need to learn different languages for client side and server side coding. Since it supports MVC architecture, you can build robust and maintainable web apps. MEAN also supports isomorphic coding which means that code written in one framework will work in the same fashion in another framework. Moreover, it is also cost-effective, reusable, cloud compatible and offers high speed which is why this role is so in demand.

Swift is a general-purpose programming language developed by Apple Inc which is used for building native iOS, MacOS, iPadOS, and other applications used by Apple. It is considered to be much faster and secure than Objective C, which was previously used by Apple for the same purpose. However, it is also compatible with the existing libraries of Objective C as well. Since Apple has been a pioneer in the smartphone industry for ages now, it is obvious that this 1 trillion dollar tech giant is here to stay. So, if you want to learn a modern programming language with an extremely bright future, Swift is the way to go.

Java is one of the most popular and in-demand languages all over the world. Since it is also such a widely-used programming language, the job listings for Java are endless. As it has built-in support for multithreading, Java can perform intensive tasks in a breeze. Along with Kotlin, Java is widely used for android app development. A career as an Android mobile app developer might just be the next big thing since mobile app development is booming and Android dominates the market share.

Developed by Microsoft close to 20 years ago, C# is host to a variety of libraries and frameworks, the most popular ones being .NET MVC and .NET core 2.0. This language is a hybrid of both C and C++ programming languages. Most people who want to build a career in game development should learn it since it’s heavily used for pc as well as dedicated consoles such as PlayStation and Xbox. Similarly, for any GUI applications, C# with .NET is given the first priority. It also finds its use in XML Web services, client-side server, Windows pcs, and database applications.

However, this list is not exhaustive and of course there are many other programming languages out there that will also definitely get you a good job. To name a few, you can make a career in SQL, PHP, Ruby on Rails, Python, Kotlin and many more. It does not matter which programming language you choose as all of these are here to stay. Hard work and dedication to the subject is what counts in the end.

So, are you interested in mobile app development? Then opt for our iOS and Android app development courses. If JavaScript interests you more, then go for AngularJS or a MEAN Stack course. It is now time to go ahead and enroll yourself in a programming course of your choice to enter the world of coding!