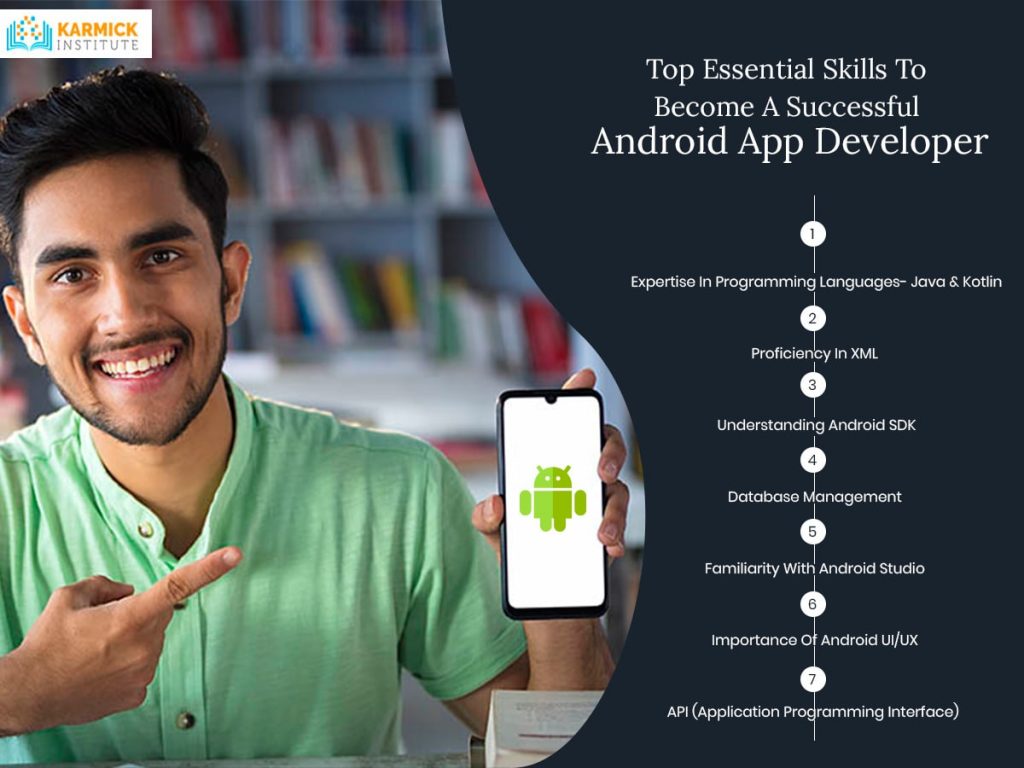 Mobile apps have changed our way of life in so many ways. You can get food and parcels delivered to your doorstep, have cabs pick you up from your location and video call with someone across the globe. All of this is possible using a variety of mobile apps. In the era of digitisation and Covid-19 we are living in, mobile app development has been on the rise.

The two main operating systems on which smartphones these days run are Android and iOS. The latter is only exclusive to phones made by Apple while every other smartphone brand in the market uses Android. So clearly Android dominates the market share and its Play Store is home to a whopping 2.87 million apps as against only 1.96 million apps in Apple’s iOS App Store.

This is why a career in Android app development seems so lucrative and is very much in demand in the global economy. Are you also wondering about the technical skills required to become a successful Android app developer? Let us take a look.

The first and foremost thing a developer should learn in any field is the required programming language or languages. In the case of Android app development, the two most preferred programming languages are Java and Kotlin. You can use either one to create an app or even both simultaneously. It is important to always remain up to date regarding the latest versions and programming structures of these languages along with a sound understanding of the syntax. It will help you to save time and make minimal mistakes when coding.

Just like the markup language HTML is used in case of creating website layouts, XML (Extensible Markup Language) is used for the same purpose when building Android apps. If you are already familiar with HTML then it is a bonus for you because XML is quite similar to it. XML allows information to be passed between various devices in a consistent manner. Since it allows seamless flow of data to web services and vice versa in Android apps, a basic knowledge of XML is a must-have skill.

Have you ever noticed that when you are scrolling through a news app, at the end of every article, there is automatically the option to share it via WhatsApp, Facebook and Instagram? This integration is possible through a tool known as Android Software Development Kit (SDK). It provides a set of prewritten codes that allows apps to use features such as camera, gyroscope, compass, sharing and much more. The most important component of Android SDK is a library called Gradle. Instead of writing fresh code every time, you can simply download the SDK.

As an Android app developer, you will have to deal with data at some point in time whether it is the data of the app itself or user data. When dealing with large amounts of data, it is not possible to keep it stored on your smartphone at all times. Instead, your app has to interact with a cloud service database provider such as Firebase or Parse. It also helps to sync data between cloud and the local storage on the smartphone. Another popular option includes storing the data locally using Android’s built-in support for SQL to interact with a SQLite database. It is a good idea to learn SQL database management system to increase your chances of getting hired.

Android developer’s choice of IDE (Integrated Development Studio) is known as Android Studio. Familiarity with Android Studio will help you work more efficiently as a developer since you can use its built in debugger and testing tools to write code that is free of any bugs. It is built on the well known JetBrains’ IntelliJ IDE and is specially designed to suit the needs of Android app developers. It has built in support for most of the common Android SDKs. It is a must have tool for both beginners and experts that ensures high performance of Android apps on all kinds of mobile devices.

A basic understanding of UI/UX is very important for an Android app developer in 2020. Users these days demand a good interface no matter how good the functionalities of the app are. If it is not up to the modern standards of UI guidelines, the app would most likely not do well. For example, developers should make sure that the app will present a different layout optimised according to the screen size of a smartphone and a tablet. In order to keep this trend up, Google has also introduced Material Design for Android, that helps to improve the overall UI/UX by implementing features such as transitions, graphics.

You might want your Android app to be able to interact with a host of other services such as a third party calendar, music player, photo editor and much more. It is not a very uncommon thing for Android apps to do this. In order to safely and securely allow your app to use APIs, you need to be familiar with it. They make your app much more interactive and widens audience reach too. So, it is a good idea to explore different APIs and find the best ones for your app.

Apart from these technical skills, you can also dabble in Git version control systems, effectively test apps before launching them and ensure that they do not compromise on security. There are also some non-technical skills such as being adaptable to different things, having good research and communication skills that will help you in your journey to become a successful Android app developer. It is time to get enrolled in an Android app development course from a reputed training center now!