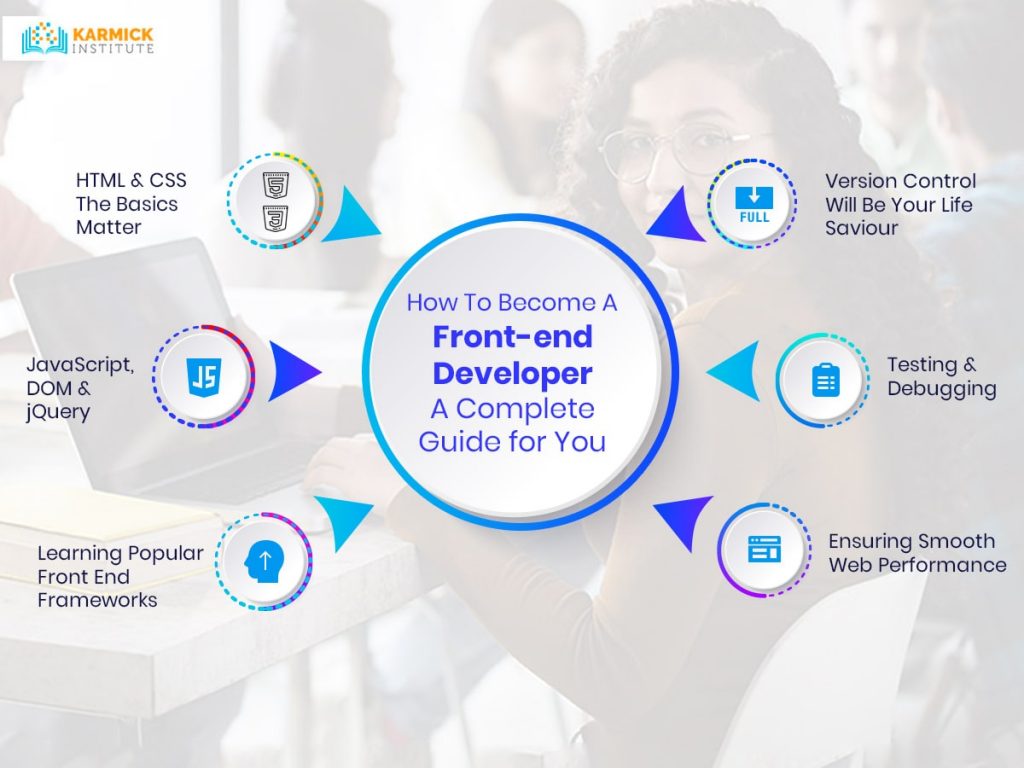 I want you to close your eyes for a second and think about the last website you had visited. Now, try to recollect each small component of the website such as the central positioning of the search bar, the menu section at the top left and login credentials on the top right. Have you ever wondered about the layout of the website? Who decides what will be placed where and how to change it if it doesn’t look good? It is all the responsibility of someone known as a front-end developer.

Who is a front-end developer?

Does this career path interest you? Well, it certainly would interest many, seeing just how lucrative and in demand it is. On that note, let us look at the skills required to become a front-end developer.

It is impossible to even imagine a career in front end development without being fully proficient with its building blocks- HTML & CSS. HTML (HyperText Markup Language) takes care of the structure of the web page while CSS (Cascading Style Sheets) is used to style and design it. With the help of HTML, you lay the foundation of your web page and using CSS, you can enhance it by adding colours, layouts, fonts, etc. You will not find any job listing for front end development that does not require HTML & CSS.

Okay, so you have learnt HTML and CSS to create a website, but what’s next? The next step is learning the world’s most popular programming language, JavaScript (JS). It is JavaScript that allows us to make a website interactive and add loads of functions to it such as scrolling, animations, audio/video, updating maps in real time and so on. Combine JS with DOM (Document Object Model) and you can manage your website much more efficiently.

jQuery is a popular JavaScript library consisting of innumerable modules, extensions and plugins. Instead of coding everything from scratch, jQuery lets you do these common tasks using just a single line code. You can use it for things like automatically resizing and adjusting grid layouts, introducing a countdown timer to your website, and much more. Who doesn’t like saving time?

Front end frameworks are libraries of prewritten codes. In layman’s terms, instead of starting from an empty text file, you get a headstart if you use these so called frameworks. They increase efficiency, save time and make the development work simpler. Some of the popular JavaScript frameworks are AngularJS, ReactJS and Vue.js. Each has its strengths and weaknesses so pick the frameworks as per your project needs.

Talking about CSS specifically, Bootstrap is its most famous framework. To get the best results, developers often pair frameworks with one another such as Bootstrap with AngularJS.

Version Control Will Be Your Life Saviour

When you’re coding from scratch and something goes wrong midway, the last thing you want to do is begin from square one. This is where version control systems come into play with Git being the most widely used. You don’t have to manually fix all your errors, instead you can just go back to the previous version of source code and try a different method. You can easily track and control changes to your code. Trust me, It’s going to save you a lot of time and trouble.

Bugs are a part and parcel of web development. Even the best of minds face this issue on a regular basis. Therefore, it is vital for you to understand how testing and debugging works. First, you run multiple tests on your code such as UI testing, unit testing and functional testing. Each test serves its own purpose. Debugging comes after this where you need to rack your brains and fix the errors by analysing the results of your test. Fortunately, there are programs such as Jasmine and Mocha which will speed up and simplify the process for you.

Even if you have made the most attractive website out there, it will be of no use if it doesn’t perform well. Users these days demand smooth performance and if there is a loading delay of even a few seconds and a slight performance glitch, they tend to abandon the website. After all the hard work you have put in, you don’t want that to happen, right? In order to ensure high performance you need to compress images and minify CSS and JS, that is, removing unnecessary, extra characters in your code. Thankfully, automation tools like Grunt and Gulp will help you there.

Apart from these technical skills, if you have knowledge of basic UI/UX designing and wireframing, that would go a long way. Also, don’t forget about the soft skills one must possess to become a front end developer. These include good communication skills, collaboration, team work, creativity and a knack from problem solving. Since web development is evolving with each passing day, small things such as reading blogs, articles, following professional developers on social media will help your cause. Yes, do enroll in a front end web development course but the learning must never stop!