Common Mistakes To Avoid As An Android App Developer 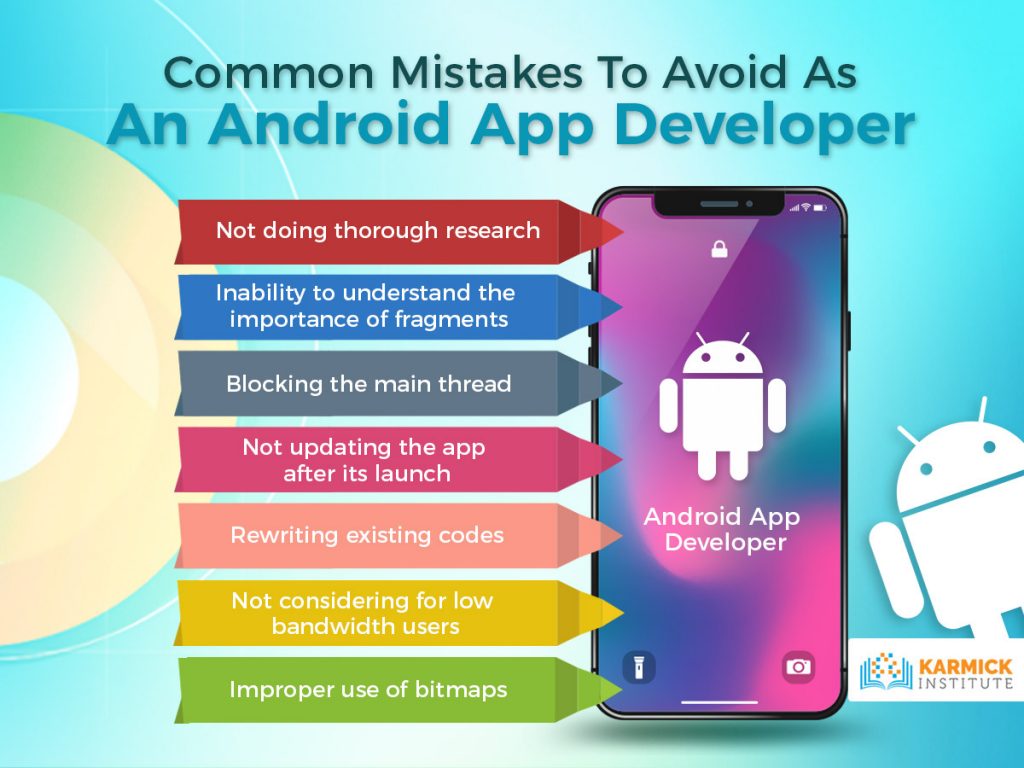 If you are a fresher, recently passed out and in high spirits about becoming an Android app developer then the first thing you need to do is calm down. Before you take the plunge in the programming world you have to study your target audience, understand their needs and psychology.

Here it is about Android users. They are larger in number than any other operating system users. So, you have to analyze the features they seek in an app. Meanwhile, an insight into your competitors’ apps will also be very beneficial. All this will help to create a strategy that will lay the foundation for your android app.

Developing an app that can attract user attention and loyalty is very difficult in this competitive market. Therefore, an app developer can be faced with a lot of problems due to which some common mistakes can be made in the process of development.

Let us see what are the mistakes an Android app developer must avoid.

A developer might be confident about Android app development but might discover to his dismay that there is already a similar app in the market. Therefore, the more you research, the better for your app. Study the target market, apps pricing, common features, new trends and user expectations. This will help you develop an app with distinct and unique features.

This mistake happens when the developer is not aware of the existing codes for features like social logins, network calls, image loading, database access, JSON parsing and others. These features already have written codes, thus re-writing them is just a waste of time. So, research about the existing codes and use the ones already available to avoid wasting time.

Not considering for low bandwidth users

Since mobile devices don’t work as fast as LAN connections, developers must consider low bandwidth users. But many of them disregard it. Using app specific image sizes will help you avoid this mistake. Using fewer images on one page and in the overall app will be better for the performance of your app.

Improper use of Bitmaps

Bitmaps is a technique used to reduce the memory usage and lags. In the process of making the app appealing, developers use a lot of images ignoring the memory aspect. Therefore, inability to understand the concept of Bitmaps results in inefficient and slow running apps.

Inability to understand the importance of fragments

Fragments are a significant aspect of Android platform as they help in passing information between screens, in organizing user interface and advanced UI design. They are separate building blocks operating within an activity and help in optimizing the content to suit the various screen parameters. Fragments are flexible in nature and can be used repeatedly and can be combined with other operations. Hence, it is important that the developers use them consistently in the creation of Android apps.

This is yet another mistake that causes the user interface to become sluggish. But app users expect and need a responsive interface. To avoid apps that stop responding, developers should use worker and background threads for network calls, SD reading/writing, loading bitmaps, querying a database and processing images.

Not updating the app after its launch

The need of the hour is variety and innovation. If you leave the app the way it was developed, the users will soon lose interest. A developer must update the app periodically with additional features, content and offers to keep the users hooked to the app and to fix bugs.

No one becomes a successful app developer overnight. It happens over a period of time and perseverance. The possible mistakes discussed above are not only to warn you against committing them but also to help you learn from them. But to avoid making the common mistakes and get the right knowledge, it is necessary to pursue an Android app development course.

Believe in your skills and ideas and keep exploring your passion so that you can create a revolutionary Android app one day.