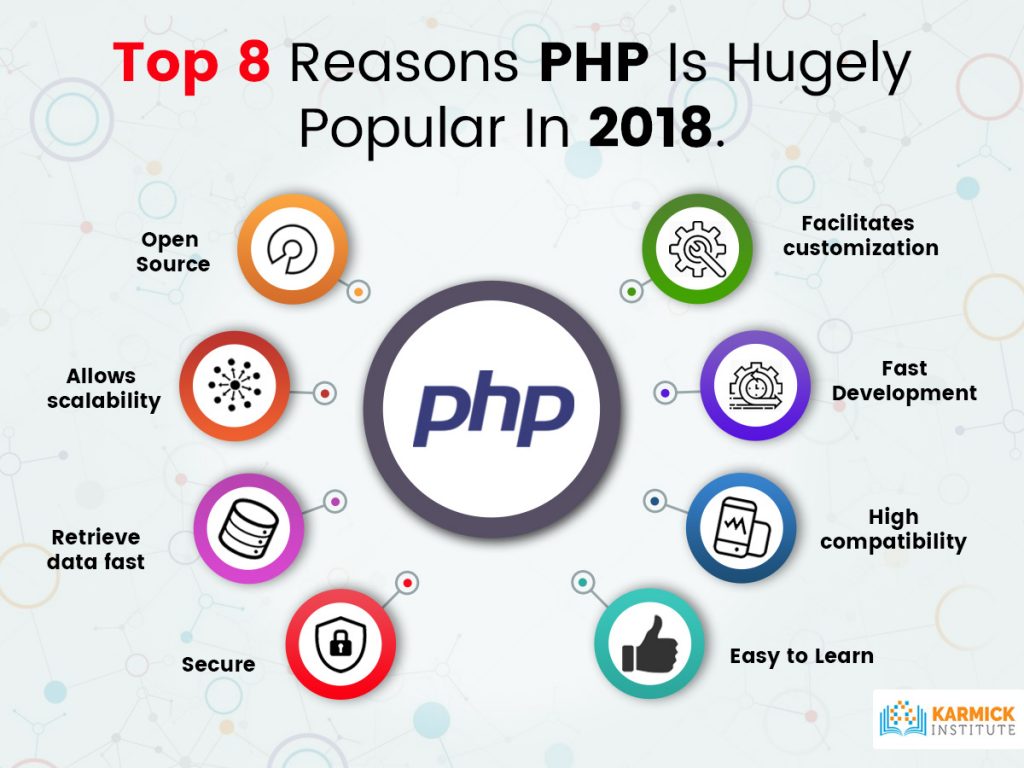 Over the years, there has been a phenomenal growth in the number of PHP users. The programming language discovered more than two decades ago is hugely popular. Many developers expressed their concern that it might suffer a setback owing to the rising popularity of other languages, but this did not happen.

Check out the websites that are built using PHP, and the reasons will become apparent. Some of the websites powered by PHP are Facebook, Yahoo, Flickr, iStockPhoto, and MailChimp. However, for the sake of convenience, here we are listing the top 8 reasons. So, let’s have a look.

PHP is a general-purpose programming language used by millions of developers for its stunning features and budget-friendliness. The fact that it is an open-source programming language makes it easier for developers to improve upon an existing code without making any payment. Also, its open-source nature helps developers across the world to develop beautiful and fully functional websites that could benefit the public without thinking about the financial aspect. Moreover, there are upgrades to fix bugs and add more features which makes it all the more appealing to developers.

When a developer chooses a programming language, a question that continuously hovers in mind is whether the website will be able to handle increased web traffic in near future or not. PHP allows the same by letting developers add more servers to handle more traffic. The fact that a dynamic website like Facebook is built by using PHP speaks volumes about the scalability it offers.

One of the most important advantages because of which PHP is going strong in spite of tough competition from other programming languages is its ability to retrieve data at a terrific speed. It is also easy to get useful tips from the ever-growing community of PHP programmers that eventually helps PHP website developers to increase the website speed in multiple ways.

It is possible to customize a website developed in PHP to a considerable extent. Developers can not only change the look of their website but can also tweak it to meet the specific requirements of their customers with ease. As most content management systems like Joomla, WordPress, and more are PHP based, it is relatively easy to create a customizable PHP website.

One can run PHP code on diverse platforms such as Windows, Linux, Mac, and Unix. Also, the scripting language is compatible with most local servers such as Apache, IIS, and more. It is thus ideal for cross-platform development.

PHP is used by big companies and government institutions alike which is a testimonial that it is a secure language. Also, the firm standing of the vast PHP community to identify and rectify the vulnerabilities on an ongoing basis plays a vital role in ensuring that it remains secure.

A website or app developed in PHP utilizes its own memory space. This aids in faster processing and subsequently rapid development of web apps and websites. The server workload and the load time of a site are reduced automatically in PHP.

In PHP, the learning curve is not steep like in the case of other programming languages such as Java, C++, and so on. There is no shortage of online resources( tutorials, videos, and more) that can help a beginner to understand and learn the nuances of the language quickly.

Lastly, it is imperative to choose a programming language that offers convenience and has an impressive list of advantages. PHP scores high in both.