How to Become a Successful Android App Developer? 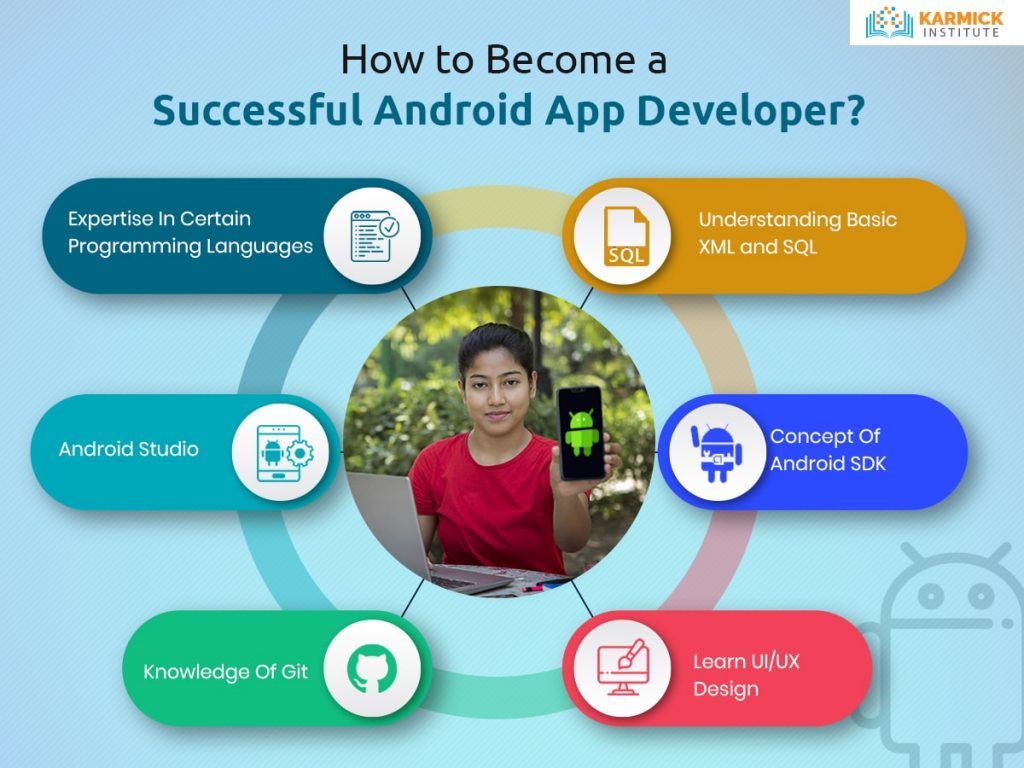 Are you someone who is passionate about mobile apps and wants to specialize in Android app development? The Google Play Store on Android devices witnesses more than 3000 releases on a daily basis! This huge number cannot be ignored. Mastering android app development will surely secure your future career and these numbers are only expected to grow as we move towards a tech savvy world. But this must pop the question in your head- what are the skills required to become a successful android app developer? Well, let’s answer that question.

The original Android OS was written in Java which makes it one of the most important languages you should definitely learn. In case you are looking for an alternative to Java, it is Kotlin. Having advanced knowledge of at least one of these programming languages is a must for android app development. Some jobs also require the knowledge of backend programming languages so you may choose from Python, Node.js, .NET, etc.

The concept and understanding of an Integrated Development Environment (IDE) really helps you in working more efficiently. Android Studio is recommended because of its built-in debugger and testing tools which will help you in writing bug-free code. There are other good options too besides Android Studio viz. Visual Studio-Xamarin, IntelliJ IDEA and DeuterIDE.

The knowledge of Git is something you might not need straight away but will surely be helpful eventually in your journey as an android app developer. This is because you will most likely need some form of version control system sooner or later and hence knowing the basic framework of Git is a good skill to bear in mind.

Extensible Markup Language (XML) is an essential technology for android developers since it is helpful in accessing web data as well as transferring data to the web and vice-versa.

And while we’re on the topic of data, another important skill is SQL since every android app needs to store data in some form or the other be it the app data or user data. Therefore, integrating your app with a database management system such as SQL is a great idea.

Android developers must be good at using the Android Software Development Kit (SDK), specially in key areas such as-

Exploring Android documentation and third-party resources will help you get a fair idea about all the necessary components of Android SDK.

Being an android app developer does not just start and end at coding. Consumers will use your app only if it provides them with a good feel and a smooth, attractive design. The importance of user interface (UI) and user experience (UX) has really grown off late so make sure you take this into account while building your app.

So these were some of the tips on how to become a successful android app developer. If you want to succeed in this field and take your career to greater heights then enroll in an android app development course which will teach you all the above mentioned skills and more.