All You Need to Know Before Learning AngularJS 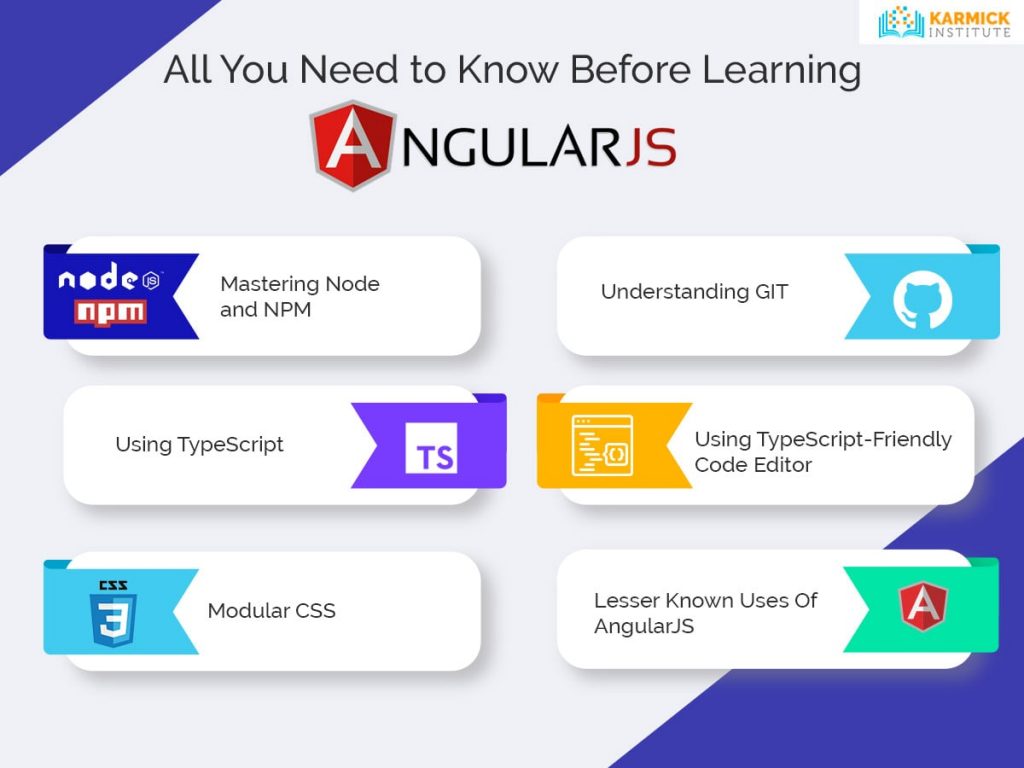 AngularJS is a popular framework of the even more popular programming language JavaScript. Developed and maintained by the world’s leading tech giant Google, AngularJS is an open-source front-end JavaScript framework based on MVW (Model View Whatever) structure to build interactive web pages, desktop applications as well as native mobile apps.

World famous websites such as The Guardian, Netflix, Upwork and PayPal are built using AngularJS. If you wish to become a web developer using AngularJS, then here are some things you should keep in mind.

GIT is a free and open source version control system which can handle anything you throw at it with ease and efficiency. Understanding the concepts of GIT is important for success in your journey as an AngularJS developer since version control forms an important part of web development.

TypeScript is a primary language for AngularJS application development and is actually a superset of JavaScript. Although it is possible to write applications with AngularJS without using TypeScript, it is really impractical. The reason being everything mainstream AngularJS is run by TypeScript. One thing to keep in mind is that browsers cannot execute TypeScript directly, it must be transpiled into JavaScript using tsc compilers such as tslint.json, tsconfig.json and typings.json.

If you use a code editor such as Visual Studio Code, Atom or Web Storm, it understands TypeScript by default or via a plugin. Getting started with AngularJS by using one of these editors will ensure simplicity since you can directly start your journey of AngularJS with TypeScript.

Simply using CSS files in index.html in 2021 will not get you very far in your journey as an AngularJS developer. Once again, using plugins such as in the case of Typescript-friendly code editors is the way to go in order to load CSS in a modular fashion via modern syntax. In order to achieve this, you can use the plugins offered by Webpack or SystemJS.

The most widely known use of AngularJS is creating websites and web pages. But did you know that it can also be used for creating desktop applications and even native mobile apps! The desktop applications using AngularJS framework can be created for all major platforms such as Mac, Windows and Linux. Native mobile apps on the other hand refer to apps that are coded and created in a specific programming language for a specific OS.

So these were some of the things you must be aware of before you start your journey of learning AngularJS. It is a great skill to learn which opens up amazing future prospects for your career growth and development. Enroll in an AngularJS training course now to get a headstart!