Why Is AngularJS A Great Choice For Your Career? 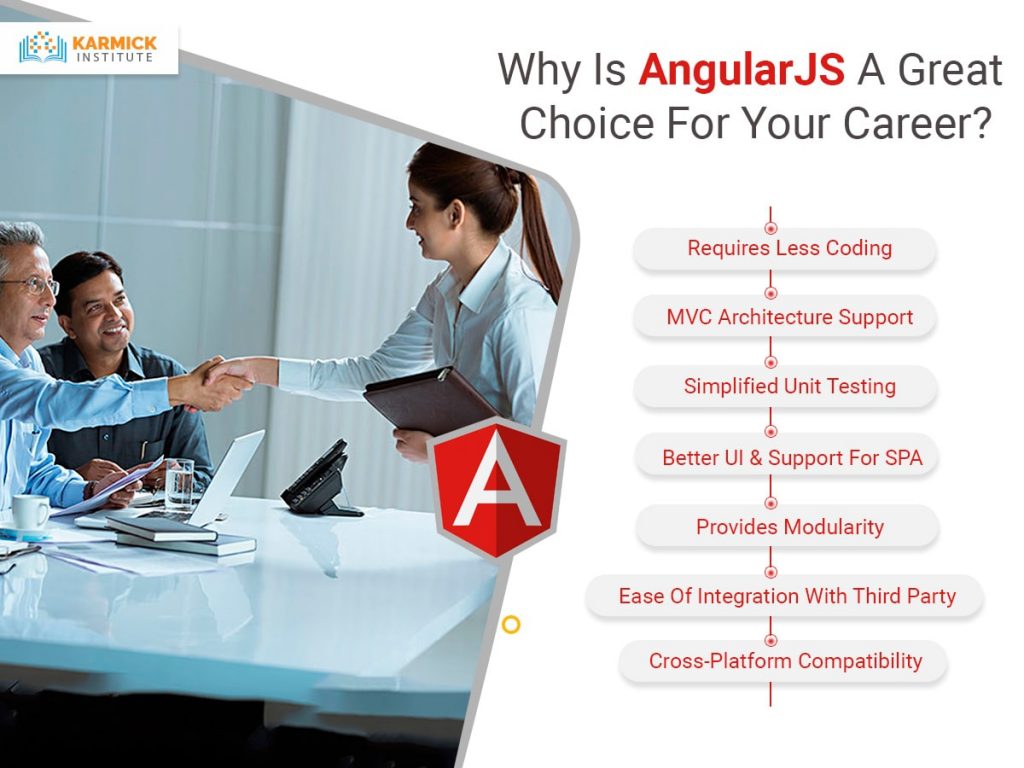 Anyone who is interested in coding must have heard about the popular programming language JavaScript, right? But, what gives a programming language the praise and prestige it is rightly known for? The answer is frameworks and libraries. Simply the knowledge of a raw programming language in today’s world will not land you a decent job. Not to mention the excess code you will have to write to do simple tasks which can be done much more efficiently using frameworks. So, in this blog, we are going to talk about one such immensely popular JavaScript framework, AngularJS.

Developed and maintained by the tech giant Google, AngularJS is an open source front-end JavaScript framework which has become the top choice for web development. It completely revolutionised web pages by making them interactive and dynamic; something that wasn’t possible with just HTML prior to the inception of AngularJS.

Netflix, Gmail, Upwork, Weather, PayPal and numerous other dynamic websites are built using AngularJS. Web developers is one of the most in demand jobs considering the present scenario, especially if you are well versed in AngularJS. Apart from lucrative job opportunities and career growth, here are a few compelling reasons to learn AngularJS-

AngularJS has many built in features such as data binding and dependency injection which requires developers to write less code. It avoids the need to sit for hours on end to write and rewrite code. It results in a much faster development process that too in an efficient manner. Ultimately, developers write the best kind of code which is short but effective.

Angular’s advantage of less coding actually comes from its support for MVC (Model View Controller). The developer simply needs to split their code to fit it into the MVC architecture and AngularJS handles the rest. There are other advantages of this popular software designing pattern MVC as well. For example, when you are going for AngularJS web and mobile app development, it will string the application code together. This will not only save considerable time but also ensure faster development.

Unit testing means the testing of each and every small component of an application to ensure that the code is absolutely error free. AngularJS has a built in unit testing setup and by running this, developers can get deep insights into the errors in application, if any. No web development process is complete without rigorous testing and AngularJS firmly believes in this. It makes AngularJS a very testable framework.

Websites built using AngularJS have a better UI (User Interface) as it uses HTML and not JavaScript. HTML is much more clearer and intuitive than JavaScript which ensures a functional yet lightweight website.

To make things even better, AngularJS also has support for SPA (Single Page Application). SPAs are basically single HTML web pages which respond to user’s interaction on the web page in a dynamic manner. They directly communicate with the back-end server and respond accordingly, without the need to refresh the page. It looks extremely eye pleasing and considerably improves UI. A great example is Apple’s landing page for iPhone 12.

A module is a collection of related components, directives, pipes and services which are grouped together and can be combined with other modules to form applications. AngularJS automatically identifies when there is a need for an additional module. Modularity is considered to be one of the crucial features of AngularJS framework since it has a couple of advantages.

The code can be kept organised and consistent when using modules which means division of labour among teams can be maintained. There is also the advantage of the lazy-loading feature which when prudently used can increase the efficiency of large applications a lot.

Ease Of Integration With Third Party

With AngularJS, integration of third party features is as easy as it gets. This is because the framework itself is pre-built into many popular frameworks such as Ionic, Kendo UI and Wijmo. It improves the overall UI to a great extent. Thus, AngularJS can also be considered to develop cutting edge UI components owing to its seamless integration with third parties.

AngularJS can be used to make applications for the following platforms-

If you wish to remain relevant and competitive in these progressive times then learning AngularJS will be a great option. Now you know that besides the good pay and career growth, Angular has many other advantages as well. So, what are you waiting for? Enroll in an Angular training course and take your career to the next level!