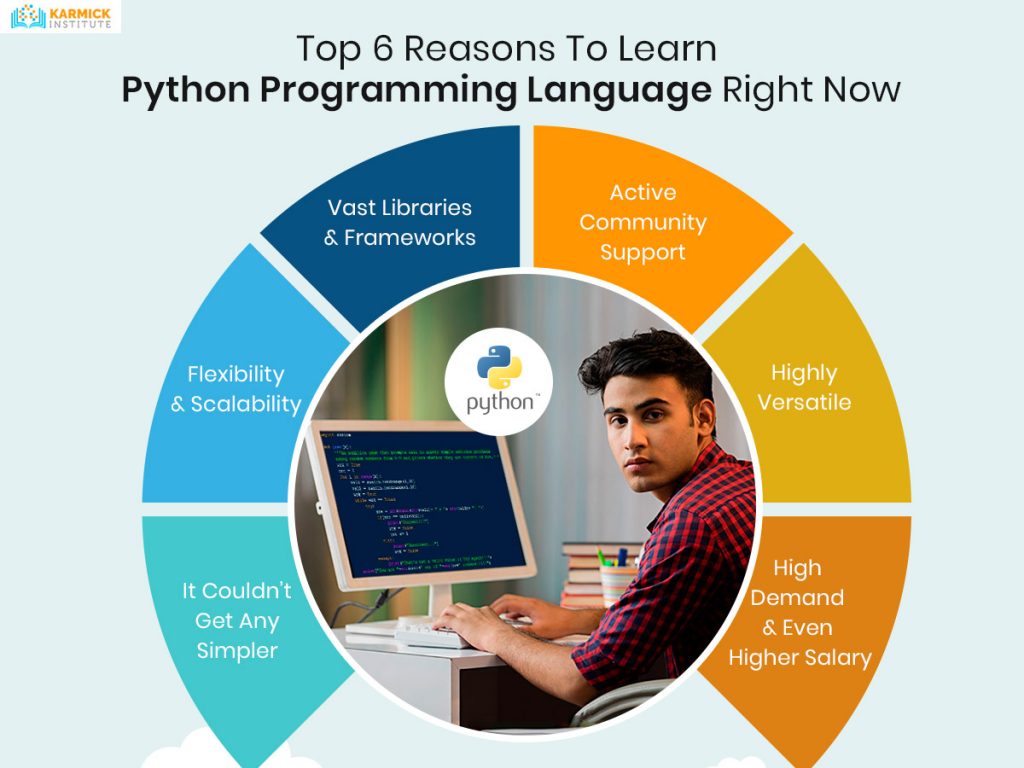 Many students who want to enter the world of programming and coding face difficulty in choosing a suitable programming language. What if I tell you that there’s one language for everyone out there regardless of your educational background? What if it happens to be the most popular and in demand programming language in the world right now? Yes, you read that right. I’m talking about none other than Python Programming Language. A recent survey conducted by Stack Overflow showed that Python has already taken over other popular languages such as Java, C and C++ to make its way to the top.

Now you must be wondering what is this Python Programming and where exactly does it find its use?

So Python is a high-level, general-purpose programming language that was created nearly 30 years ago. It is mainly used for server side web development, software development, data science and in many other avenues.

If you are still not convinced, then here are the top 6 reasons to learn Python right now-

It Couldn’t Get Any Simpler

If you are reading this sentence that means you can learn Python. Because guess what? Python very closely resembles the English language! Furthermore, it also has simple syntax and readability when compared to languages such as C, C++ and Java. It is also very user friendly when it comes to setting it up. All you need to do is install Python and voila, you’re good to go. It is because of these reasons that Python is the best choice for newbies.

When it comes to flexibility, Python has integrated applications with a host of other programming languages. For instance, .NET and C# compatible IronPython, A version with C known as CPython and Python integrated with Java- Jython. Similarly, it is so highly scalable that many times it is used to solve problems that even Java cannot solve. Owing to its highly flexible nature, Python is also called the Swiss Army Knife of computer languages.

The sheer number of open source libraries, frameworks and modules that Python offers is more than enough. No matter what your needs are, Python has got you covered. Python’s Package Index (PyPI) has more than 85,000 scripts and modules that the users can access. For example, Django is the most popular one for web development while NumPy and Tensorflow are used for Data Science and Machine Learning respectively.

Given how popular this open-source programming language is, Python enjoys one of the world’s largest online community support. This is helpful for learners as well as professionals for a number of reasons. In most cases you will find that the issue you are facing has already been faced by some other developer who has written an article on the same. If not, you can always seek help from Python Forums & Discussions anytime. It is wisely said that one of the greatest tools that a programmer will ever have is the support of his community.

This is one aspect where Python absolutely shines. The uses of this programming language are endless. It is extensively used in Data Science, Web Development, Machine Learning & Artificial Intelligence to name a few. Python opens doors to many more fields such as automation, testing, product development, graphic design application and web frameworks. No wonder that big names such as Google, Facebook, Instagram, Amazon, NASA are all making use of Python due to its versatile nature.

Python Developers are among the highest-paid developers across the globe. They command a handsome salary particularly in popular fields such as Data Science, Web Development and Machine Learning. Presently, it is also the fastest-growing programming language as analyzed by Stackoverflow. Being so versatile and flexible, Python developers have bright career opportunities ahead of them. Owing to its use in so many different industries, there is always the need for Python developers in the job market.

It is clear that for anyone who is interested in coding, Python is the best place to start. It’s a simple language which is highly in demand and pays well. What’s not to like? Enroll in a Python Training Course and keep up with this cutting edge technology.