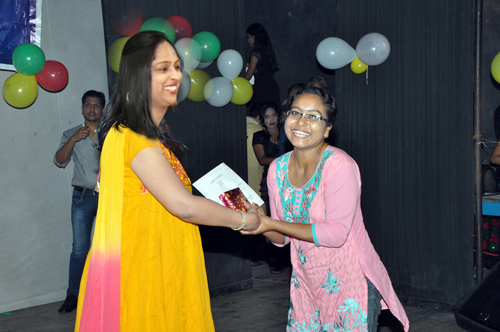 23rd September 1999 was a bright sunny day when Karmick Institute along with its parent company Karmick Solutions Pvt Ltd took its first small steps. 14 years have passed since then. Over the years we underwent a lot of changes but our aim and motto to create IT sound individuals never wavered for a bit. So far we have produced several young, bright and energetic IT professionals who are now part of several IT companies.

Karmick Institute organized an event to mark its 14th Foundation Day and celebrate its birthday on 28th September, 2013 on Jogesh Mime Academy with a host of cultural programs along with a fashion show followed by a musical extravaganza by Arijit Chatterjee and his band.

The day began on a colorful note, with Karmikites taking active part in decorating the stage. Once the decoration was done and the stage was all set, the program was inaugurated by our Senior General Manager Mr Debabrata Adhya along with our Chief Guests Arnab Jyoti Pal (of Bou Kotha Kau Serial Fame) and Faiz Khan (of Kahani fame).

The main attraction of the ceremony was the prize Distribution where Karmick Institute gave away certificates to the Students for their Sincere Performance as well as the Star Performers of the PHP and Web Designing Team. In the near future Karmick Institute aims to recognize more and more talent so that it acts as a morale booster and encourages the students to perform better.

Once all these programs got over everyone was hosted to a diverse menu of food items that came in the form of a Lunch Box. As always the food was great. And yes, how can we forget the musical extravaganza by Arijit Chatterjee and his band. We danced our hearts out and finally the celebrations came to an end.