What Is The Difference Between UX And UI Design? 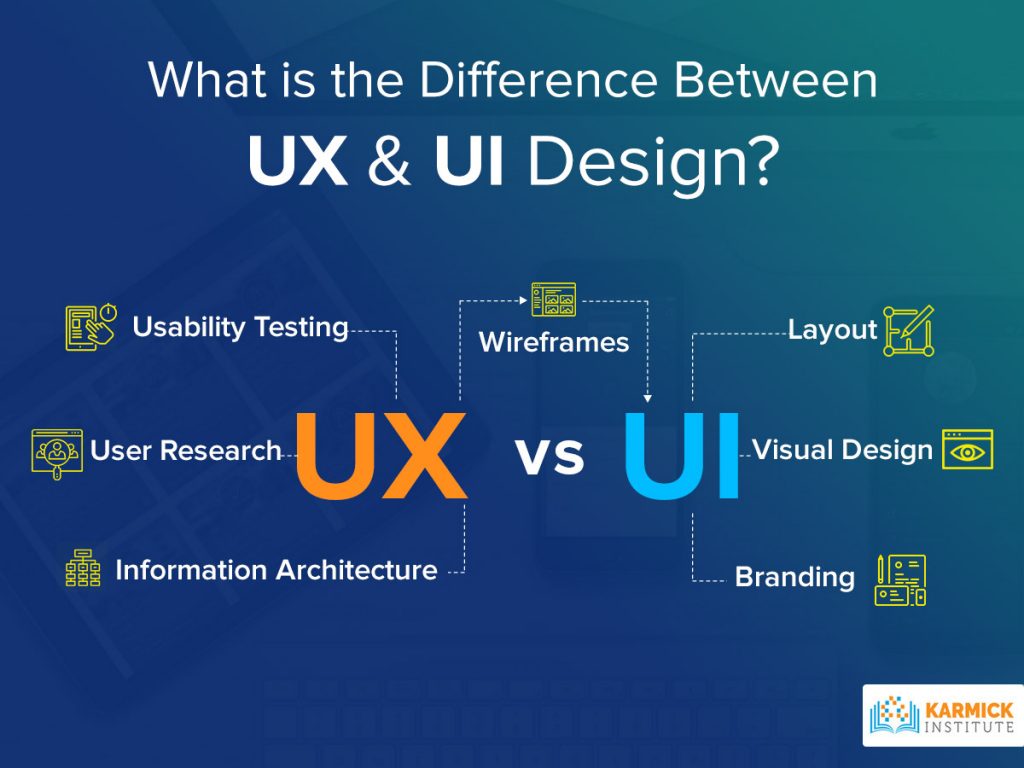 Today, UX designers are facing a dilemma. Employers expect them to possess UI skills as well. With every passing day, the demand is growing. According to some surveys, 66% of all UX jobs listed also ask for UI skills. Whether it be a small start-up or a large multinational company, the trend remains the same.

So, it is quite clear that possessing proficient knowledge on both the domains gives an individual enviable edge when it comes to the job market.

UX is not UI

User Interface Design may be looked upon as the combination of visual and interaction design. Visual design may be likened to the personality of a site – its look and feel. It is the very essence of the brand. Interaction design is the way people will interact with the site. For instance, when someone clicks on a button at the site, does it modify itself so as to make the user know that the click has been successful?

Both UI and UX designers design interactions. The UX designers look at the holistic picture. The UI designers take care of the details.

A UX designer is in charge of designing user flows. For example, what are the steps that a visitor will take to sign up for a newsletter? How will they know if they have been successful in signing up for the letter?

Once the design is complete, it is then given to the UI designer. The latter accentuates the simplistic design of the UX designer to embellish it with colorful clues and colors to make it very easy for the visitor to navigate into successfully signing up for the newsletter.

What is User Experience Design?

User Experience Design (UED or UXD) is the process of enhancing loyalty and customer satisfaction by improving the pleasure, usability, and ease of use between the product and the customer.

User Experience Design includes all interactions between a company and a customer. The use of this term since the very beginning has been almost completely within the digital field. One of the major reasons why this is so being because the industry began to explode at around the time this term was invented. Another important reason why this term became so popular is that it is synonymous with market research.

Having said that, UX is not the same as Market Research. They merely adopt similar techniques in their execution – the optimisation, analysis, and structure of a company’s products and its interaction with the customer.

The UX role is a part project manager, part designer, and part marketer. It is a multifaceted, challenging and complex role. In the end, the intention is to connect the user’s requirements with the business goals through a process of refinement and testing that lives up to the expectations of both sides of a partnership.

UX design is the process of improvement and development of good interaction between the company and the user. It is responsible for the processes of prototyping, research, content, development, and testing. In theory, UX design is non-digital but it is primarily used in the digital industry.

What is UI Design?

User Interface Design is the interactivity and presentation of the product. This profession is often interpreted in terms of graphic design, branding design, and front-end development. Its descriptions are similar to User Experience design as they often use similar structural techniques.

UI design is a challenging and multi-faceted role. It is responsible for a product’s development, layout, content, and research transforming into a responsive, attractive and guiding experience for users. It is a purely digital profession.

The UI designer’s role is interactive and visual. The responsibility of the implementation of the design lies with the developer.

UI designers are responsible for the transfer of a brand’s assets online to create a better user experience. It visually guides a user through a product’s interface. It is a purely digital field.

Difference between UI and UX

It is important to know the difference between UI and UX even though UI is an integral part of the design. As an example, let us consider a website that does movie reviews. Even if the UI of the website is perfect, the UX of users will not be good if they are searching for an independent movie made on a small budget but the website only harbors information on big-budget movies made by large studios.

Another good example is Google. It has a very simple UI. Its UI comprises of a logo, a search results page, a few buttons and a search bar. However, when we type something into the search box, we instantly gain access to an abundance of human knowledge at our fingertips in less than a second. If however, instead of delivering what we are looking for within a second, Google took more than 15 seconds to come up with the results, our UX with Google would be substantially poorer.

UX design is concerned with anything that solves a problem within the user’s journey. UI design is concerned with how a product looks and feels online. UI is only a part of the journey. A very apt analogy that very correctly describes the difference between UI and UX is the restaurant analogy. UI is the utensils, table, glass, plate, and chair. UX includes the food, music, service, lighting, and parking.

People often mistake the definition of a UI and UX designer. A layperson might think that if one designs the UI and people experience a product through the UI then that makes the UI designer also a UX professional. This is flawed logic. It is comparable to saying that individuals who design their own homes are architects and people who mend the taps at their homes are plumbers.

UX refers to any touch point that a customer or a user has with a system whether digital or otherwise.