7 Reasons To Choose PHP As Your Career 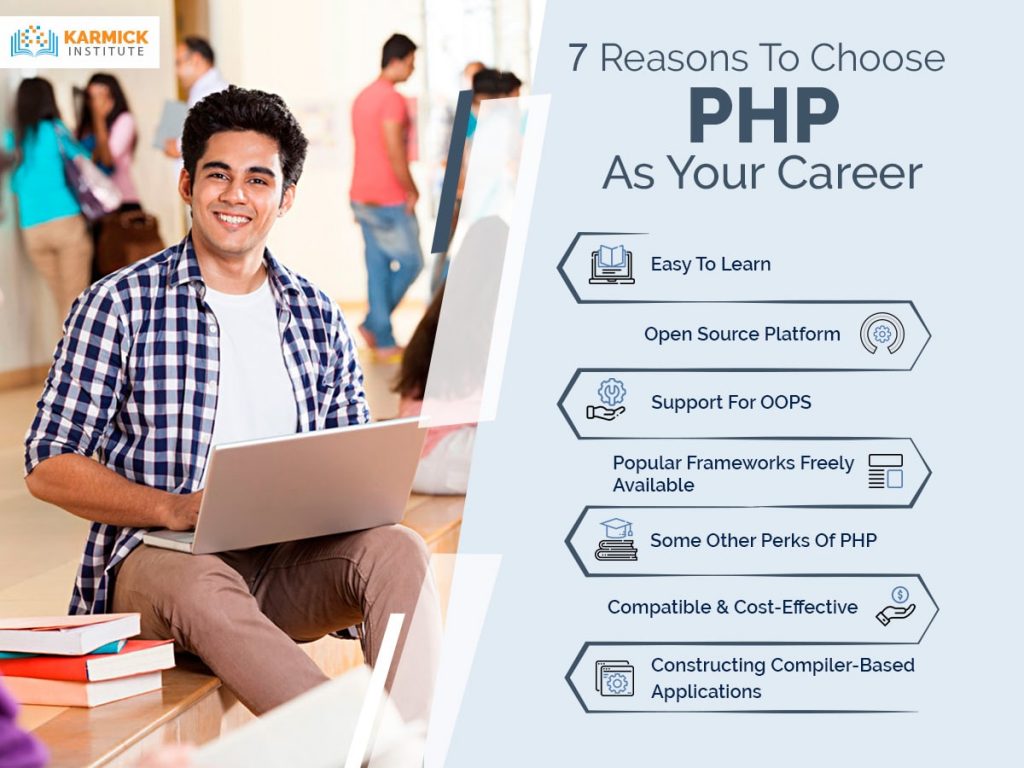 Did you know that popular names such as Facebook, Slack, Spotify, Yahoo and Wikipedia are just a few websites that are built using PHP? In fact, believe it or not, 83% of all websites on the internet make use of PHP.

Many students who are looking to make it big into the world of IT are often confused upon seeing so many career paths and job opportunities. In today’s modern day and age of internet, website and applications, PHP stands out as the primary choice for web development needs. The growth prospects of PHP in India have been tremendously good over the last couple of years.

What Does A PHP Developer Do?

A PHP (Hypertext Preprocessor) Developer works on the server-side web application. They help in connecting it to third party services, develop and integrate plugins for popular frameworks as well as take care of all the back-end components.

Let us now take a detailed look into why PHP is such a great choice for your career.

Unlike some complicated programming languages, PHP’s syntax is simple and closely resembles Java, C and Perl. You can easily find a lot of resources, practical examples and case studies on the internet that will show you exactly how to work with PHP. This makes the learning curve much simpler.

Since PHP is an open source language, it is 100% free of cost. It also allows PHP developers to access a bunch of useful things viz. MySQL, Apache and Linux. This open source language is also backed by an active community of enthusiast PHP developers who are constantly putting their best foot forward to make improvements, solving problems and smoothing out rough edges.

With the introduction of PHP5, Object Oriented Programming came into play. It is used by enterprise systems which use concepts such as inheritance, polymorphism and data encapsulation for their needs. Popular applications which use Object Oriented Programming are Joomla, Magento and WordPress. If you are already in the world of programming and have some knowledge in Java and C++, then using PHP as an OOPS will be much easier for you.

As mentioned before, PHP is an open source language which provides many valuable resources for free including its wide range of frameworks. Popular frameworks are what makes a programming language truly successful and PHP has managed to do that. Some of the advantages of using these frameworks are the ability to reuse codes and using tested codes which are less prone to errors. Therefore, it leads to faster development with less code to write. Here are the names of popular PHP frameworks- Laravel, Symfony, CodeIgniter, Zend, CakePHP, Yii, Phalcon and Akelos.

PHP can also be used to make compiler based applications. This idea is now deployed by Magento in their ecommerce applications. Basically, it allows applications built in other languages to be integrated with the PHP ecosystem. For instance, many of PHP’s extensions are built with the help of Language C. PHP includes many applications such as MySQL, JS and HTML.

Inter-OS compatibility and cross-platform development is a breeze with PHP. The programming language is compatible with Windows, MacOS, LINUX and UNIX. You do not have to bear the headache of writing extra code for each separate OS, making things pretty cost-effective for developers. It supports all the major servers such as Apache, Microsoft IIS, Netscape, iPlanet and so on. There is also support for over 20 databases with popular ones like MySQL, MongoDB, PostgreSQL and so on.

Some Other Perks Of PHP

As a programming language, PHP is most dynamic and flexible in the sense that websites can be easily scaled, secured and customised. This makes it an ideal choice for CMS development wherein websites are very fast and responsive. Since it can be lodged into HTML, conversion of static websites into dynamic ones becomes quite easy using PHP.

The Standard PHP Library (SPL) is basically a collection of interfaces and classes that are meant to solve some standard problems. SPL reduces development time considerably. In many cases, PHP requires coding right from scratch which can be challenging as well as extremely time-consuming for newbies. Instead, you can simply use these libraries to add the necessary features to your website without having to write tedious codes. Some of the popular PHP libraries are Dispatch, Klein, Buzz, PChart, PHP Captcha, ImageWorkshop, Mink and Ratchet.

Last but not the least, the demand for PHP developers is soaring along with their CTC. But yes, keep in mind that as a fresher you might not secure a very high paying job in PHP but with experience and knowledge, sky’s the limit.

You can start with a basic PHP course and specialise in a particular framework such as Laravel. If you are already a computer science graduate or software engineer, go for the advanced PHP course. You will surely get placed at a non-MNC initially but with time and effort you can rise to a PHP Project Manager at a reputed MNC.