5 Reasons To Enroll In A Node.js Development Course 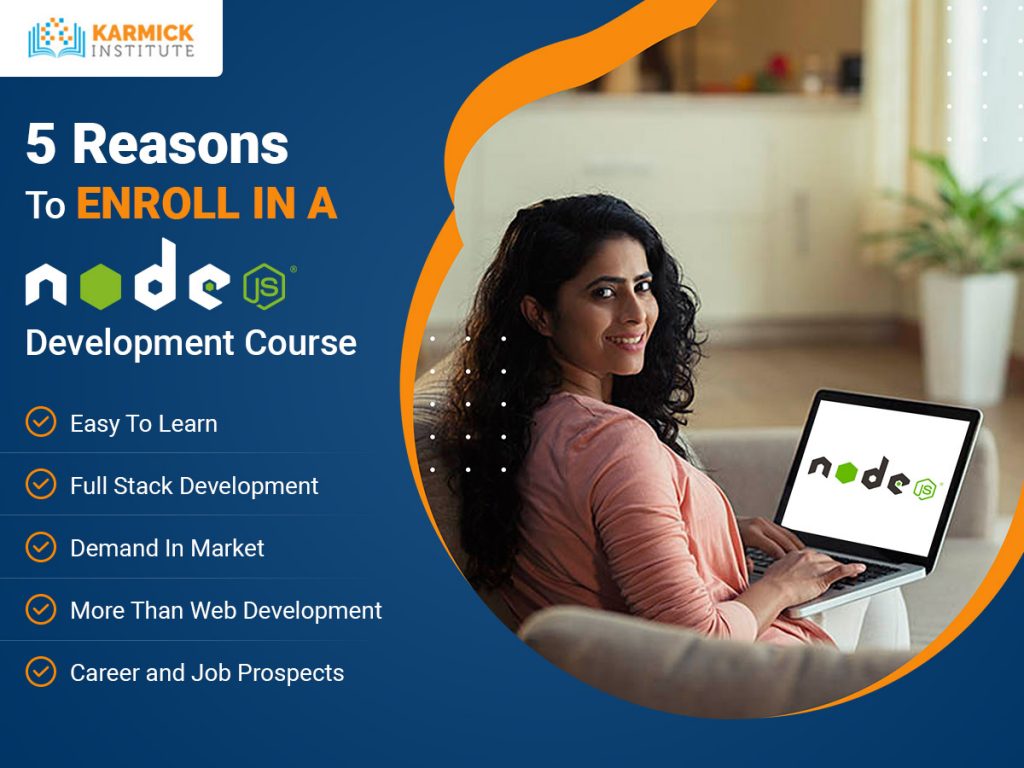 In recent years, the growth of Node.js has been so remarkable that it is now the go-to technology for many renowned companies across the globe. Netflix, PayPal, Uber, Walmart, LinkedIn and even NASA have all shifted their tech stack to Node.js. It has now become one of the most widely used JavaScript tools ever. You know why Node.js is so great for your career? Let us take a look at the benefits it has to offer.

Node.js applications are written in JavaScript, which is one of the most prominent programming languages. The good thing is that it is easier and simpler to learn than other popular languages such as C++ or Python. Synchronization of data between server-side and client-side coding is also easy due to the common language, JavaScript.

As said earlier, Node.js uses the same language JavaScript on both the client-side and server-side. You won’t have to spend additional time learning different languages such as Php,Java, HTML or CSS for both sides. Hence, by studying JavaScript in depth you can take care of all parts of the programme, be it front-end or back-end and thereby act as a full stack developer.

With more and more companies harnessing the power of Node.js, the job market for developers is hot. Being an open source platform, JavaScript sees many frameworks appear and disappear but Node.js is here to stay. As it also uses the powerful Google’s V8 JavaScript engine, the future of Node.js is bright indeed. Due to its increased productivity, reduced costs, scalability and high execution speed, corporates are extensively using Node.js and hiring developers for the same.

Node.js is flexible, versatile and adaptable. It can be used for a wide variety of purposes other than web development too. Yes, the primary use remains web development but it can prove extremely useful for those working in operations and framework. For instance, it can be used as a tool to develop other development/collaboration tools and for a wide genre of apps like IoT, streaming, instant messaging to name a few.

What good is it to enroll in a course only to find out that it’s not helping you get a satisfactory, well-paying job? Thankfully, that’s not the case with a Node.js development course. Companies prefer hiring full stack Node.js developers as it cuts down the need for hiring separate back-end and front-end developers. As per LinkedIn Jobs, the number of openings for Node.js developers worldwide, outweighs Php by almost 10,000. Tempting, isn’t it?

So those were just five out of the many reasons to learn Node.js. With its popularity in recent times and glowing career opportunities, enrolling in a Node.js Development Course should be no brainer. Whether you are starting your career or already an experienced developer, learning Node.js will definitely give you the upper hand.